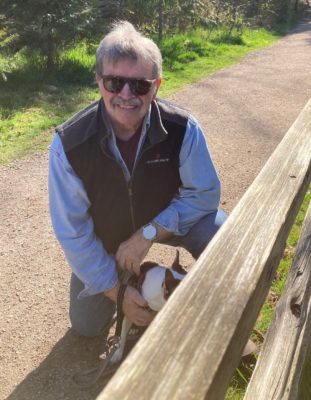 Pier Morten lives in Burnaby, British Columbia. He is married and has been blessed with three grown children, one grandchild, with another expected later this year. Pier enjoys kayaking, sailing, tandem bicycling, and hiking.

Pier was born deaf with good eyesight but is now totally blind. Pier was one of the first to attend the deafblind program at W. Ross Macdonald school in Brantford Ontario in 1971 where one of the teachers encouraged him to participate in sports. He became interested in wrestling and judo, eventually progressing to the highest levels of each sport.

Pier trained in Vancouver to became the world’s first deafblind person to earn a black belt in Judo. He began competing in, placing near the top of the leader board, and winning a number of bronze, silver, and gold medals at the highest levels of international competitions in locations as diverse as The Netherlands, South Korea, Spain, Australia, West Germany, New Zealand, and Bulgaria.

Pier has competed in a number of weight classes in both wrestling and judo in the Paralympic Games as well as in the Deaflympics.

Beyond his many medals, Pier has been bestowed a number of distinctions and honours, including having been named flag bearer at the closing ceremonies of the 2000 Paralympic Games.

He was named British Columbia’s Disabled Athlete of the Year in 1987 for both Wrestling and Judo, then for Judo again in 2000.

In 1988, Pier became the first man presented with the Whang Youn Dai Achievement Award for exemplifying the spirit of the Paralympic Games.  That year, he was also awarded Sport BC’s Harry Jerome Comeback Award.

He won the International Blind Sports Federation’s Athlete of the Year Award in 2002.

Pier has demonstrated to the world how persistence, even in performing challenging tasks in very competitive environments, leads to success.