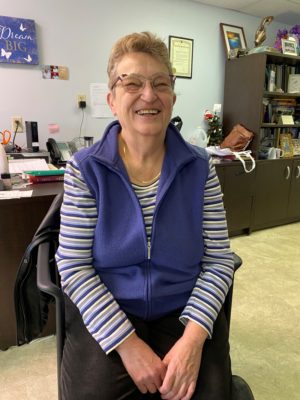 Jane Sayer is deafblind and lives in Winnipeg Manitoba.

She was one of the founding members of the Manitoba Deaf-Blind Association (MDBA), a consumer advocacy group that fought for deafblind services to be provided in Manitoba.  Ms. Sayer is currently the co-chair of MDBA.

The MDBA’s activities resulted in the founding of The Resource Centre for Manitobans who are Deaf-Blind (RCMDB).

Jane attended the university of Manitoba, earning her case management certificate which, in turn, enabled her to become the coordinator at RCMDB.  She remained in this position from 1997 until 2012.  During this time, she helped many people who are deafblind to live more independently. Although Jane is now retired, she is still actively involved in her community. She currently chairs the acting board of RCMDB.

Jane Sayer has been recognized for her work both as a volunteer and employee with RCMDB, through obtaining the following awards

Beyond her work on the MDBA and the RCMDB, Jane has volunteered on the board of Canadian Society of the Deaf-Blind in several positions, including President.  She has been a member of the Canadian Deaf-Blind Council, the Manitoba Deaf-Blind Association, and she has also functioned as an advisor to the Canadian Transportation Agency on the necessary accommodation needs for travelers who are deaf-blind.