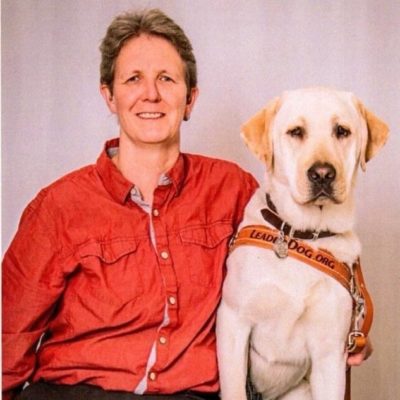 Megan McHugh is a contract worker for Canadian Helen Keller Centre (CHKC) in Toronto.  She teaches those who are deafblind to use assistive technology.  She teaches in person either at the CHKC facility or in consumers’ homes.  When needed, she uses such online meeting applications as Zoom.

Megan is an excellent role model for the acquired deafblind population as she adapts to her own recent significant vision loss.  She is learning to use Braille and a screen reader to work on her computer and relies on a guide dog to travel within her community.

Megan had depended for many years on lip reading to compensate for her declining hearing when communicating with others.  Her declining vision no longer allows her to use this method.  She has been fitted with two cochlear implants to assist her hearing and uses intervenors who repeat what others say to assist her understanding.  Coping with declining sight and significant hearing loss is much easier when people who are deafblind can access intervention services.

Megan likes to ride tandem bicycles with a group of people.  She has also played hockey with a team of players who are blind.

Megan won the JT award in 2017.  The award was named after Joyce Thompson, known as “JT.”  Joyce was a visionary leader in the deafblind services sector who played a key role in establishing Rotary Cheshire Homes and the Canadian Helen Keller Centre.

The JT Award was established in 2010 by Rotary Cheshire Homes and the Canadian Helen Keller Centre to recognize the efforts and achievements of individuals, consumer groups, or service providers who have made a significant and lasting contribution to the deafblind community in the areas of awareness, expansion, and involvement.

Megan is currently the president of the Canadian National Society of the Deaf-Blind (CNSDB),  and she has consulted, in partnership with the Deaf Wireless Canada Committee (DWCC) and the Canadian Association of the Deaf (CAD), with the Canadian Radio-Television and Telecommunications Commission (CRTC).

In this role, she contributed to obtaining a significant reduction of data rates with the larger Internet Service Providers.  This helps many Canadians who are Deaf and deafblind who require more data usage to transmit video calls which use sign language.  They also use way finding applications and access information while ‘on the go’ much more than the general population.