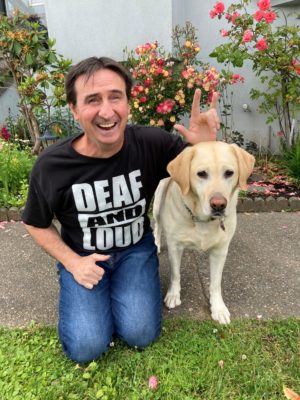 Eddie Morten Lives in Burnaby B.C.  He is the proud father of two sons aged 22 and 25.  He has been a guide dog user since 1999 and now works with his third dog, Kore.  Eddie was born deaf, then became blind in his left eye when he was eight years old due to Retinitis Pigmentosa, the leading cause of deafblindness in Canada.  He is now completely blind in his left eye but can perceive light in his right eye.  He uses tactile American Sign Language (ASL) to communicate.

For over 25 years, Eddie has been a leader in the deafblind community in Vancouver, advocating doggedly for improved services.  For example, Eddie has successfully advocated for those with disabilities to be able to travel independently on all modes of transportation, for access for those who use guide dogs, for the installation of accessible pedestrian signals in several locations around Greater Vancouver, for the need to educate interpreters on how to best work with the deafblind community, for accessible voting, and for increased intervenor services.

Eddie won a legal battle with Air Canada that lasted from August 2004 until January 2009 when a tribunal ruled in his favor.  At the time, Air Canada would not allow Eddie to purchase a ticket to San Francisco from Vancouver through a travel agent, asserting that he would be unable to communicate in an emergency. They would not allow him to travel alone.  Eddie explained how he could have communicated with staff in such a situation.

Eddie was one of the founding members of the B.C. Association of the DeafBlind, now the Deaf-Blind Club where he managed intervenor training and social activities for several years.

In 2013, he participated in the Rick Hansen School Program Ambassador training where he renewed his acquaintance with his former Paralympic teammate, Rick Hansen.

In 2009, the Western Institute for the Deaf and Hard of Hearing conferred its Award of Merit on Eddie for his advocacy on behalf of the deafblind community.   Eddie was also awarded the Joyce Thompson Award from the Rotary Cheshire Homes/Canadian Helen Keller Centre in 2013.

Eddie currently works part-time for the Quest Food Market, a non-profit organization.  British Columbia has remarkably few services for people who are deafblind.  Eddie is well respected by those he has worked with and continues to be a strong advocate and an inspiration to the many people who know him.